To explore and create their own movement sentence using both physical and written literacy.

Some prior knowledge of Yoga poses would be helpful. If used with 2nd grade understanding what a noun and verb is.

Students move to the YouTube story (see video below). Teacher should decide what Yoga Poses to review prior to the story.

After the story, students can be broken into small groups. Each group should have a set of Yogi's Yoga cards. (links out to a Google Drive)

The teacher should differentiate the directions by grade level as noted belowl.

First grade: Create two movement adventure sentences. For each adventure choose 2-3 cards. You may use one "Create Your Own" card if you like. Communicate your two adventures through movement.

Second grade: On the back of the noun cards write some verbs, action words that would go with the Yoga pose. You may want to talk with classroom teachers. For example Lion: pounce, roar, sneak, stalk. Boat: rock, float, sink, chug.

Students should create two adventure movement sentences. They may choose 3-4 cards and must use descriptive verbs as the tell their story through movement. Older students could be asked to add rhyme. 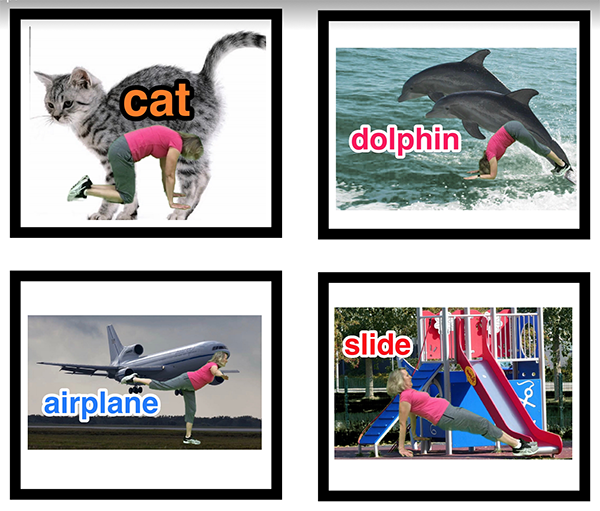 As you are watching the students ask yourself these questions.

As students communicate their adventure did they?

Submitted by Sandy Hageenbach who teaches at Heritage Elementary School in De Pere, WI. Thanks for contributing to PE Central! Posted on PEC: 6/29/2020.