To learn the pathway that the blood takes, and what happens as it travels throughout the entire circulatory system.

The description below assumes a class of exactly 24 students. For larger or smaller classes, you don't necessarily need to increase or decrease the amount of equipment needed since your students can share space in the Hula-Hoops and tug-of-war rope. But you will need to vary the red and blue playground ball counts to ensure that there are enough balls so that every student of each group can have one.

Activity Area Set-Up: Place (8) Hula-Hoops (body cells) on line on one side of your area, and (8) Hula-Hoops (lungs) on line on the other side. Form the tug-of-war rope (heart) into a large circle, centered between each line of hoops. Divide the tug-of-war rope circle in half by placing the (6) cones in the middle, to separate the heart chambers. Place all of the (16) foam noodles between the body cell hoops and the tug-of-war rope, alternating blue noodles (veins) with red noodles (arteries). Finally, place the (8) blue playground balls (blue blood deprived of oxygen) inside each of the body cell hoops, and the (8) red playground balls (red, oxygen-rich blood) inside each of the lungs hoops.

Evenly divide your class into (3) groups: the body cells, the heart, and the lungs. Direct each group to go stand in each designated area, so that your students will be occupying space in the Hula-Hoops on either side and within one side of the tug-of-war circle.

Explain to them that this activity simulates how the oxygen-deprived blood is sucked into one of the heart chambers and sent into another chamber where it is then pumped into the lungs to pick up oxygen that the body needs for energy. It is in the lungs that the blood turns from blue to red. Then the red oxygen-rich blood is sucked into a heart chamber where it is then delivered into another chamber to be pumped into the arteries, which deliver the oxygen-rich blood to every cell in the body.

It is important to perform several rounds of this activity, so that everyone gets to experience each of the jobs involved by the various body parts of the circulatory system. 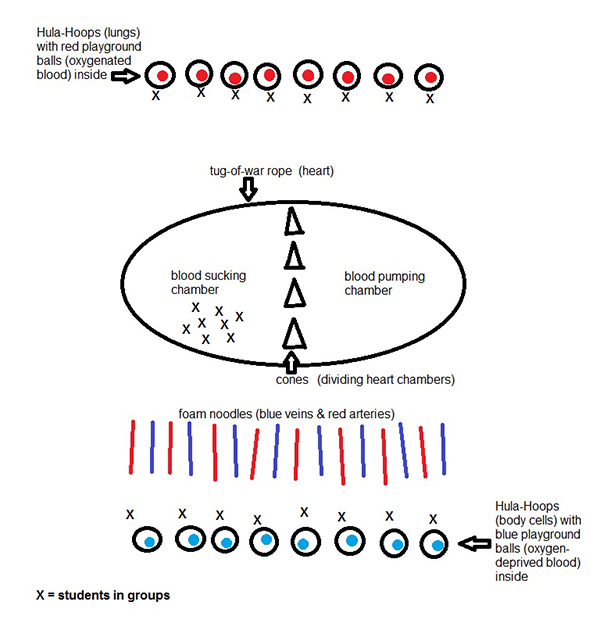 Check to see that each student is going in the right direction at each station throughout the activity.

Submitted by Robert Weekes who teaches at Harvest Preparatory Academy in Yuma, AZ. Thanks for contributing to PE Central! Posted on PEC: 5/25/2018.

There are currently no comments to display. Be the first to add a comment!