The students will be able to incorporate rhythm and cardiovascular activity into the familiar Hokey Pokey dance.

CD player, 1 pair of jump bands per every four students, portable microphone (almost a necessity in order to be able to cue during the routine and above the noise of the music)

Jump Band Movements (This mimics the movements of the tinikling poles.):
During the chorus of the song – “You do the Hokey Pokey and you turn yourself around. That’s what it’s all about.” The children with the jump bands will jump 2x with their feet apart and 2x with their feet together. They will do this 4x during each chorus.

The Dancers’ Movements (This is the tinikling step, using a four (4) count movement instead of the traditional three (3) count!):
The dancers will place their R side to the bands. When the bands are apart they step in with their R foot and then their L foot. They will then step out on the R foot (dancers are now on the opposite side of the band) and hop. They will then reverse the movement – in with the L foot and then the R. Step out on the L foot and hop. (They are now in the original starting spot.) They will do this 4x during each chorus.

When the chorus begins each group must be ready to do their own steps to the music.

The song ends with an extended chorus which allows the students to do the jump bands and the four count tinikling steps several extra times.

* Make sure that you do the entire song two times through - thus allowing the children to switch places from dancers to jump band persons. 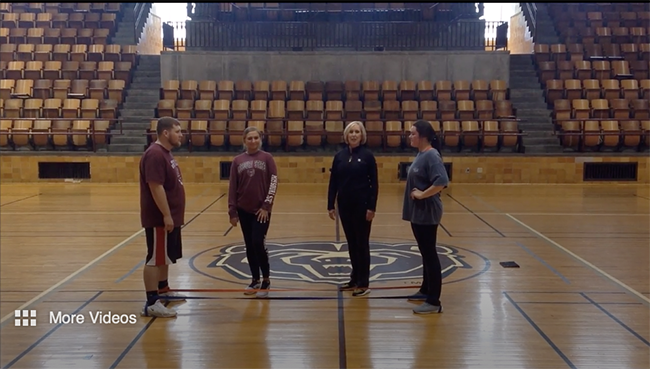 Children who are dancing can do other movements. They can start with the L side to the jump bands and reverse the basic step.

After a discussion of heart rate and exercise, students can take their heart rates. They can compare the heart rates of jumpers vs. dancers and the level of intensity of each type of activity.

Submitted by Brenda Goodwin who teaches at Missouri State University in Springfield, MO. Thanks for contributing to PE Central! Posted on PEC: 2/12/2019.